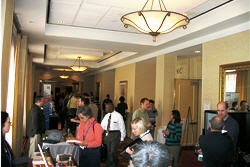 Per my last blog entry, I attended the Philadelphia Emerging Technologies Enterprise (ETE’09) Conference, hosted by Chariot Solutions, on 3/26 and 3/27.

Focusing on the Wrong Transition

This may seem surprising, but in my experience the majority of organizations are using ad-hoc, not waterfall, or agile processes, for developing software. Although it wasn’t the topic of Jim’s talk, my key takeaway is that the agile community has been focusing on the wrong transition, waterfall-to-agile, while the focus should be ad-hoc-to-agile!

Another key takeaway, more on the topic of Jim’s talk, was that as we successfully mature an agile project, it should, over time, become more of a continuous endeavor instead of a traditional project.

Ken Pugh gave a presentation on Acceptance Test Driven Development (ATDD) using Fit and FitNesse. A focus was on how table-driven specifications can serve as both requirements and tests, reducing the ambiguity associated with free form text, improve communications, while making it easy to specify tests with good coverage. I have successfully applied Fit on a number of computation heavy applications and found it of tremendously useful. Ken showed that table based requirements can also apply to other scenarios, such as testing complex business rules and state transitions.

David Chelimsky gave a talk on Executable Documentation, which, like Ken’s talk, was essentially about ATDD. David’s talk included table based requirements, and other advanced ATDD tools in a number of languages, including Ruby. He showed very specific examples of how current tools and approaches improve traditional tests, to that the point that they truly become executable documents (i.e. specs), moving us ever closer to the using a consistent language across all development activities.

A Newbie After a Decade of Experience?

Corey Haines gave a presentation on the The Pair Programming Journeyman Tour. A highlight was when he showed a video of an interview with Bob Martin where Uncle Bob told Corey that he was just starting out his career, despite the fact that he has 10+ years experience! The takeaway here is that there are many people to learn from, even after a decade in the field.

Unlike an agile only conference, the ETE’09 had multiple tracks, which made for a good cross exchange of information and knowledge. In addition to learning from the presenters, I learned a lot from the attendees so I hope to see you at next years conference.