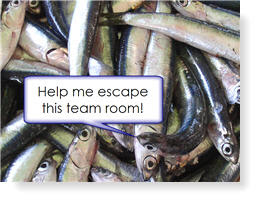 Agile teams are often co-located with all team members sitting in one physical room.  The rooms are often spacious, with ample natural light, an effective layout, nearby private space, etc., and, as a result, productivity is high.

But, there is an anti-pattern; productivity-robbing team rooms that please no one (OK, maybe the cost accountants are happy).

Let’s start with a quick look at some attributes of good team rooms.

Sometimes agile team rooms are designed from inception into new floor plans, or as a well thought out redesign to an existing floor plan.  In other cases, team rooms are put together with little focus on productivity.

Let’s look at one near worst-case scenario, the instantaneous conference room conversion, a.k.a., ICRC.  With an ICRC, existing employees re-locate from their cubes or offices to a conference room, often joined by new staff members (consultants or new employees).

Let’s look at a theoretical, but all too common, example of an ICRC Anti-Pattern:

In our example a team of 18, eight existing employees, two new hires, and eight consultants, are packed into the conference room (hey, why not, 20 people can sit there for a meeting).

This conference room, like many, has good ventilation and natural light. Additionally there is ample white board space upfront.

On the other hand, there is no tack board or magnetic boards for cards, so one on wheels is brought in, which takes up just enough space to make it difficult for those sitting in front of the board to get in and out of their chairs.  When people come by during the day to look at cards, it is a tight fit, which sometimes results in a few spilled cups of coffee.

Power and network connectivity is available only at the two ends of the room so long wires are dangerously snaked throughout the room.

There is no place for private stuff so team members place their personal possessions under the table and in the desks of friends who are located elsewhere.

Many of the team members used to use separate full size keyboards and an external monitor, but with the reduced space, ergonomics is a luxury that can’t be afforded.

Taking personal calls now requires a hike to the lobby area or outside, the most private spaces still available for the team.  Conference calls are conducted several times a week in the room, and although collaboration is important, it is rare that all 18 team members are required for a call, but they really have no option other than listening.

As a result, our team experiences a significant increase in stress.  They also experience minor injuries like tweaked backs from leaning at odd angles, carpal tunnel syndrome from typing on a poor laptop keyboard and eyestrain.  No surprise, illness is also passed around quite rapidly.

Productivity is low to non-existent, and 18 team members produce output that a team of four could easily create.

Management eventually notices, and mercifully, the team is disbanded.  Unfortunately, this was the first agile project, and the entire transition to agile is canceled based on the poor results of this one effort.  Apparently no one in management seems to understand just how detrimental the poorly designed team room was.

Despite what the above scenario may lead you to believe, I am an advocate for team rooms, assuming they fit the needs of the team, are designed by the team, and provide basics like ample space, ventilation, light, windows, ergonomics, storage, nearby private areas, etc.

But, as extreme as the above scenario seems, truth is often, stranger, and worse, than fiction. I had to make the scenario sound plausible so I couldn’t use the real examples I have seen (you wouldn’t have believed them)!  As agile usage continues to grow, and as companies continue to face tough economic realities, anti-patterns like the Instantaneous Conference Room Conversion will likely occur more and more frequently.

As agilists, we have to dispel the notion co-location equals agility.   We also need to accept the fact that if the space isn’t available, perhaps it may be better to:

Please respond with your thoughts and experiences.