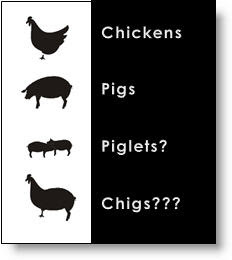 Although many don’t like it, all agilists are familiar with the chicken and pig joke that explains that pigs are committed to success, while chickens are at best involved. As we continue to move to larger scale enterprise agile, we can benefit from understanding varying levels of participation and commitment. As such, I use terms like piglets and chigs to describe patterns and anti-patterns of team participation and commitment.

Chigs on the other hand, are individuals who look and act like chickens, but whom should really be pigs or piglets. Chigs are often worse then chickens as they frequently focus on finding problems and derailing the project instead of helping the project succeed.

The evil inverse of a piglet is a chig. For example, let’s assume you are developing a new application in a high security environment. Your team works hard to understand the complex security infrastructure, but the custom services for authentication, authorization, and file transfer, along with multiple dependencies on other teams, makes it difficult to get clarity on how to proceed.

Unfortunately, Chuck, let’s call him Chuck the Chig, is the Security Engineer assigned, part time, to your team. The part time nature of his assignment is a problem, but even worse, he is simply not concerned about your project’s success.

Chuck the Chig views his role as telling you why your system can’t go live, without giving you solutions. Here’s a sample conversation that you may have with Chuck the Chig or other chigs like him.

You: How does our app look from a security perspective?

Chuck the Chig: Not good, I don’t like the authorization mechanism. I will have time in two months to review this again after you fix it.

You: But, as you know, we are due to go live in six weeks, and you have had access to everything since day one. Can you give me a specific recommendation and work with us to fix the problem?

Chuck the Chig: You don’t seem to understand my role. As a Security Engineer, I can tell you what is wrong, but I can’t tell you what to do. You have the detailed, 218 page, document that describes valid protocols and how to leverage our security infrastructure. Read it, fix the app, and when I have time in six weeks, I will check to see if you have done it correctly.

Even worse, Chuck the Chig goes back to his peers, and explains just well, how dumb your team is. In short, Chuck the Chig views his role as an auditor, someone who finds problems, not as someone who helps with solutions. In fact, he gets more accolades from his boss for pointing out problems than he does for helping your team succeed.

Pulling off the Feathers

The pattern described above is far too common, and it often occurs with individuals from compliance, architecture, privacy or similar groups in larger companies. It would be nice to have full time participation from the aforementioned groups, but this is often not possible. The real leverage point is a commitment to success by those who may potentially view themselves as chigs. They, their bosses, and the organization, must view them as piglets, or Extended Core Team Members if you prefer, and use whatever limited time they have on the project to maximize the chance for success.

Saying this another way, you need to pull the feathers off of the chigs and make them piglets, where pulling off the feathers is a metaphor for removing the false assumption that there job is to find problems (e.g. their job is provide solutions).

The example above makes the case for the piglet and chigs delineation, highlighting the importance of being fully committed to project success even when participating only part time.

I coined the term piglets quite some time ago, but special thanks go to Teresa Tierney, a creative individual indeed, for coming up with the “pulling off the feathers” analogy. Hopefully this vivid metaphor will help your team (including those on the Extended Core Team) achieve success.