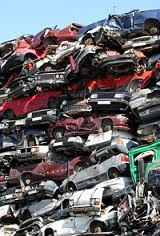 This article is about the Cash for Clunkers Program (officially the Cars Allowance Rebate System). It won’t discuss how disappointed I am that I couldn’t purchase that Ford Escape Hybrid (a SUV that gets 30 MPG, no surprise they were hard to get) I wanted, nor will it discuss the merits of the program for stimulating the economy or helping the environment. Instead, it looks at how this program exemplifies a future where the Federal Government has to become increasingly agile to rapidly deliver software in the face of changing needs.

The Historical Government IT Landscape

By and large, most Government IT has been waterfall based but there is a growing adoption of agile for development of software on classified projects in the DoD and intelligence communities. Reasons why agile has penetrated these pockets include:

The Need for Agility in Government IT

Some assume that Government IT time-lines can be defined in years (i.e. no speed required) and that flexibility is not only not required, but in fact not desirable, as the goal is to build to a predefined baseline (i.e. making it easy to gauge the performance of contractors).

Cash for Clunkers was a federal program that gave buyers $3,500 to $4,500 towards a new, more environmentally friendly, vehicle when they traded in an old, gas guzzling vehicle. In the end (see http://www.cars.gov/files/official-information/August26PR.pdf), close to 3 billion dollars in rebates were given for the purchase of almost 700,000 new fuel-efficient vehicles.

Cash for Clunkers Program was not a classified project, and it was for the civilian sector, not the DoD, but, from an IT perspective, there was both a short time-line and shifting requirements.

As Wikipedia documents, changes continued after this:

“Although the program officially started on July 1, 2009, the processing of claims did not begin until July 24, and the program ended on August 24, as the appropriated resources were exhausted. The deadline for dealers to submit applications was August 25. According to estimates of the Department of Transportation, the initial $1 billion appropriated for the system was exhausted by July 30, 2009, well before the anticipated end date of November 1, 2009, due to very high demand. In response, Congress approved an additional $2 billion.”

In short, the development staff faced continuing changes in requirements and had to deliver in a short time frame, thus dispelling assumptions about the acceptability of long time lines and static requirements.

We know that agile approaches are quite appropriate for a growing number of government projects that face shorter deadlines, increased risk and dynamic requirements. Unfortunately, the agile community can’t point to the successful agile efforts on black projects due to their classified nature.

As such, please comment on your experience with, and thoughts about, the use of agile for IT Projects in the federal, state and local governments, especially for projects that are not classified.