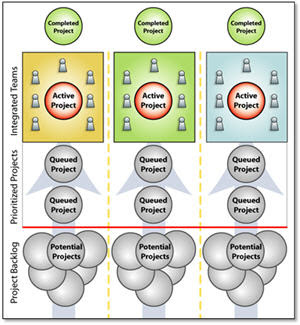 Several years ago, I was working with a client who was obsessed with keeping resources (in this case, people) 100-percent utilized. The client boasted that he had a strong matrixed organizational structure and everyone was a member of multiple teams working on multiple projects. When I came on board, I noticed that people were spread extremely thin between the projects. There was a lot of work being performed but very little was getting done. How can you make real progress if you have multiple managers asking you to deliver that high priority something for them? How can you make real progress if you have to constantly shift gears and go in different directions?

In theory, having a matrixed organization sounds really great. Resources can potentially be utilized up to 100 percent. In reality, the goal is not utilization of a resource. The goal is throughput and delivering something of value. In the end, having a matrixed organization made people busy but it did not make them more productive. Perhaps managers felt more productive because they essentially had more people they had to manage. But again let me stress, the goal is not to manage people. The goal is to deliver something of value. When I did my original assessment, there were two common complaints. First, team members didn’t know who to take direction from. Second, team members never seemed to have time to just focus on one thing and get it completely done.

Once we got people grouped into several (cross-functional) teams and then collocated in team areas, we actually started making deliveries on projects. The PMI would define this reorganization as being projectized. But, let us not forget that this is about the teams and creating an environment in which they can deliver value.

In our Enterprise Agile Workshop, we explain how organizing around teams allows you to estimate, plan, and deliver at a more accurate level of granularity.